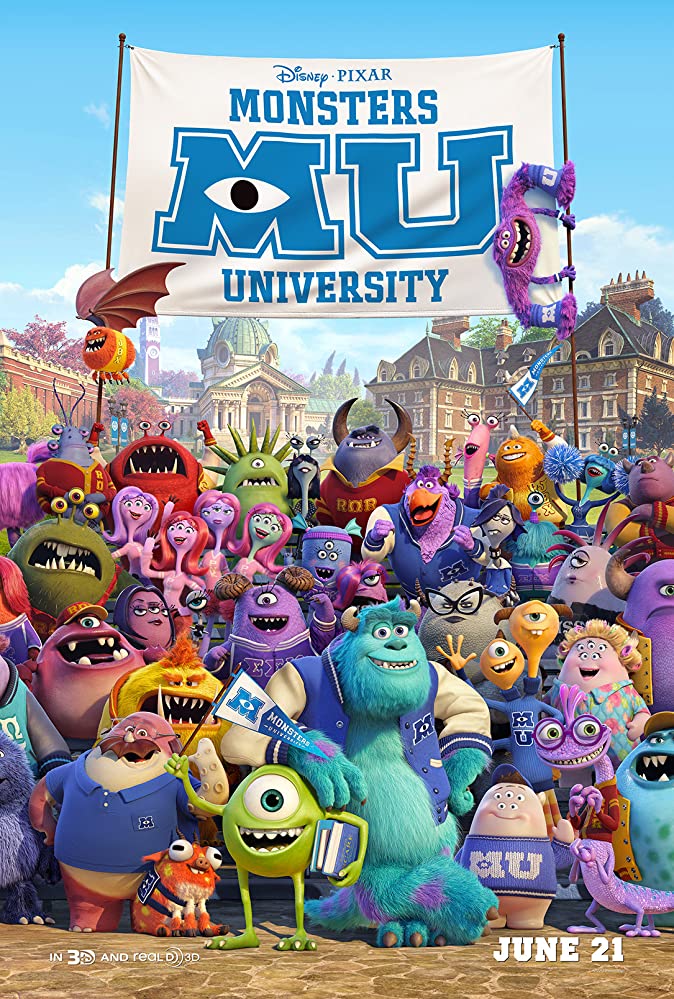 Monsters University is an animated family film directed by Dan Scanlon. The plot follows Mike (Billy Crystal), and Sully (John Goodman), in their university (or college), years serving as a prequel to Monsters Inc.

This film is needless, there is no way of getting around that: it did not need to be made. However, despite this it adds a few nice character arc wrinkles to the beloved duo that are worth talking about. It shows how when Sully and Mike met they were adversarial, Sully coasted by on his father’s name and didn’t bother to try and Mike is trying very hard to be something that he is not. It is interesting to see their motivations and behaviour here and then to rewatch the first film, it gives it some new flavour.

The trademark Pixar heart is present, in a much-reduced capacity from the original film though. You do empathises with Mike as you can see how hard he wants to be a scarier despite not being scary, it is heart breaking and the big emotional moment at the end of the film when he finally gets to step over the line onto the factory floor is a cheer worthy moment and feels earned.

Overall, this film is needless there is no getting around that, but it adds to the motivations and characterization of various people from the first film adding a new context which is nice and crucially beneficial.

Adds rewatch value to the original

Onward is a computer animated urban fantasy film directed by Dan Scanlon. The plot sees two elf brothers Ian (Tom Holland), and Barley (Chris Pratt), go on a mythical quest to find a rare gem that can bring their dead father back to Earth for one day. The themes of this film are family and being proud of who you are as a person/ being more confident.

On the surface this seems like just another fantasy animated film, the themes and motivations feel samey, but the emotional impact of the film as a whole is what elevates it over mediocrity. I don’t have any siblings, but even I was feeling something when at the end of the film Ian went without his chance to meet his father so Barley could say a proper goodbye to him instead; I can only imagine how impactful this scene would be if you actually had siblings to draw parallels with.

I think Ian and Barley as characters are perfectly fine, they’re serviceable enough, they won’t join Pixar’s pantheon of beloved animated characters, that’s for sure. Pratt seems to be doing his best Jack Black circa 2005 impression, which is okay, and he is probably the character I like the most. I like the energy and good nature the character has; he is the only character I was invested in.

Ian on the other hand I found annoying, I don’t know if it was the writing or Tom Holland’s performance, but I never warmed to his character, even by the end of the film I still felt very little for him. To me, the character seemed overly whiny, he complained and bitched and moaned at every turn, I get that his character is supposed to be sad, but he sucked the fun out of every scene he was in. What’s more Ian treats his brother like dirt for a good 3 quarters of the film, he doesn’t care about his brother getting to see their dad, no he never considers that, just what he wants and his time with their dad, moreover he openly calls his brother a screw up, even though all his brother has done up until that point is try and help him. So yeah in a film about brotherhood and brotherly love, to have your main character treat his well-intentioned brother, as a moron he would rather not have to deal with is a weird character decision.

Overall, this is not a great film, nor is it a terrible one, it is just fine. There are some neat Shrek esque ideas of display here, but they are never really tapped into, the emotional impact is good, but Ian and the side characters aren’t, it is a textbook example of a mid-tier Pixar film.

Ian is whiny and annoying.

I was never really blown away by any of it.

Brave is an animated fantasy film by genre giants Pixar. The plot follows Merida a Scottish princess, who doesn’t like that she has no control in her own life; being expected to marry and keep alive old alliances.

When looking back at Pixar’s history and filmography, Brave falls solidly in the middle, in the average category. However, I genuinely believe that this film is criminally overlooked and, is, in fact, one of Pixar’s best.

The crux of the story is a relationship between a mum and her daughter, Princess Merida, (Kelly Macdonald), wants to have her own life and, follow her heart, whereas her Mum Queen Elinor, (Emma Thompson), wants her to marry and, become the next queen; crucially they don’t understand each other and won’t listen to what the other has to say. Merida makes a deal with a Witch, (Julie Walters), to give her a potion that will ‘change’ her mum, thinking it will change her mum’s mind; instead it turns her into a bear.

Despite her mum not being able to talk from this point forward, until the very end of the film, the emotional relationship between these two characters is a thing of beauty. As the two go on a journey to get Queen Elinor turned back, they bond and learn to see things from each others point of view. Despite this being done before, it perfectly captures the mother-daughter relationship in an incredibly honest way, that only Lady Bird has done before, it is incredibly affecting; and is a fantastic example of the soul Pixar films are known for.

The voice cast is fantastic, Kelly Macdonald is a great leading lady and, the role of Queen Elinor seems as though it was written for Thompson as she captures the regal, wise Queen in a way only she can. However, the standout performance of the voice cast is Billy Connolly as King Fergus, he is effortlessly hilarious and, perfectly captures the loving if misguided father.

It is nice to see a Scottish Princess and to see a film inspired by the folklore of the Highlands, it gives the film a very unique sense of identity, that I for one greatly appreciate. I would love to see more films set in this universe and, see the mythology further explored; as there is a deep well of folklore waiting to be tapped.

Ultimately it is a crying shame how this great film has faded into obscurity, forgotten under the weight of Toy Story and Coco. This film is beautiful and, has more soul than any other animated film I’ve seen this year. If you didn’t see this film when it came out or, just love Pixar films than this is a must-watch. This is miles better than the likes of Frozen and has a message we should all take notice of.