Jen, played by Jackie Van Beek, and Mel, played by Madeleine Sami, run a business where they break up couples.

I enjoy quirky comedies and this was just the ticket for me. I thought it was frequently funny as well as quite heart-warming. The film has a nice message of remaining optimistic in life and staying open to love. It managed to balance heart and comedy well giving each both room to excel whilst also knowing how far to go with the sentimentality before it would be overly so.

I thought both of the leads were good though I would probably say Sami stole the show for me and just pipped it to be the breakout here. Sami’s Mel is easy to root for and her enthusiasm is heart not to be infected by.

Overall, a comedy film that makes you laugh and feel, very sweet.

A slight case of pacing issues

If you enjoyed this review, then please head over to my Patreon to support me, I offer personalized shoutouts, the ability for you to pick what I review next and full access to my Patreon exclusive game reviews. Check it out!

A family is attacked by a duo of deranged men.

What was the need for this film? What did it address that hasn’t already been done so better before? Honestly as I am sat here writing this review after having seen it, I struggle to answer either question. There is nothing wrong with a film being gritty when it is in service of something, but here it seems to be done for nothing more than shock value.

A lot of people don’t like films like Hostel as they feel they are over the top, needless and handled in bad taste, well personally I like the Hostel films well enough but I can see all those complaints being true here of this film. It was deeply unpleasant to watch and even more so to finish, it was so bleak, depressing and needless that honestly I struggled to finish it.

I think the thing that makes everything worse is how incredibly predictable it all is. There truly are no surprises here, you know exactly where this film is going throughout, you don’t want it to go there but rather predictably it does and it is unpleasant for doing so.

Overall, this is one of the hardest films I have ever had to sit through.

It is bleak and depressing

It feels done in bad taste and for shock value

It is incredibly predictable

It has major pacing issues

It is a chore to watch

If you enjoyed this review, then please head over to my Patreon to support me, I offer personalized shoutouts, the ability for you to pick what I review next and full access to my Patreon exclusive game reviews. Check it out! 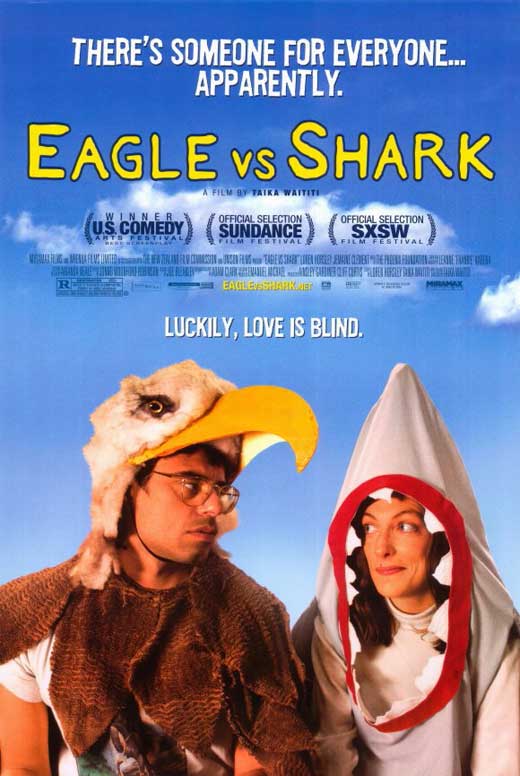 Eagle Vs Shark is a New Zealand set romantic comedy directed by Taika Waititi. The plot follows the romance of Lilly (Loren Horsley) and Jarrod (Jermaine Clement), with a subplot about Jarrod’s quest to track down his high school bully and beat him up.

As far as Waititi’s film goes this is oddly off beat and almost sad, the wackiness of something like What We Do In The Shadows is a million miles away from this film instead it shares more in common with the darker more upsetting moments in JoJo Rabbit or Hunt For The Wilderpeople. I left this film feeling depressed.

The central romance has quite a few troublesome elements, in that Jarrod treats Lily like trash for most of the film, even dumping her abruptly to run of with his dead brothers girlfriend: the apology for his bad behaviour at the end of the film does not make up for it, and really they shouldn’t be together. However, as far as toxic messages within romantic comedies go, this film is on the better side of the scale and isn’t as offensive.

There are odd stop motion sequences peppered in throughout the film that I am not quite sure how I feel about. On the one had they fit in with Waitit’s quirky sensibilities, however they also feel quite unsettling and troubling for reasons that I cant quite put my finger on, there is just something about them.

The one positive I can find for this film is that the humour worked for me and I found myself laughing quite a bit.

Overall, this film really didn’t jive with me at all which is surprising considering that for the most part Waititi and Clement can do no wrong.

It has a few laugh out loud funny moments

It is a bit too melancholic

The animation is weirdly unsettling

It leaves you bummed out.

Baby Done is a New Zealand comedy drama film directed by Curtis Vowell. The plot follows the life of reluctant soon to be Mother Zoe (Rose Matafeo), as she has to deal with the fact that her life is changing beyond her control.

Taika Waititi’s (the executive producer) finger prints are all over this film. I mean no criticism by this, rather I am saying that Vowell has managed to recreate than sense of outsider charm that Waititi is know for. Watching this I was reminded of early Waititi ventures such as Eagles Vs Shark, both feel tonally very similar and that is a good thing.

I enjoyed this films atypical look at motherhood, and how not everyone is thrilled with and into the whole mum idea. I think this film speaks to what a lot of women might feel but not vocalise and it is nice to see this type of motherhood represented on screen as it provides a nice contrast to stereotypical Hollywood I wanted to be a mum all by life types.

The characters are wonderfully quirky and delightfully funny, this is a particularly true of Matafeo, but it also applies to Matthew Lewis and some of the supporting cast. Though this film might not be a laugh a minute, it does make you chuckle here and there, and you are smiling constantly throughout.

My favourite thing about this film is the way it handles Zoe’s emotions, it shows her confusion, fear and frankly anger towards being pregnant as well as the joy when the child is born, this provides a perfect emotional nuance to the film that helps to further its impact.

Overall, a film that manages to do both heart and comedy well.

The nuanced take on motherhood

Straying from the standard